Quincy Pipella is a recognized dancer & choreographer from Edmonton Alberta, Canada for the past 10 years. She started dancing at Sandra Gray School of Dance at the age 4 to 18 and trained in many styles including Jazz, Tap, Ballet, Lyrical, Musical Theatre, Pointe, Modern/ Contemporary and last, bot not least, Hip-Hop. Her love for Hip-Hop started in 2008. She soon after found interest in choreography in 2011 at Victoria School Of The Arts while she was taking their Dance 30 Composition IB program. Since then, Quincy has won many Hip-Hop awards and scholarships and has performed and taught for a variety of different Hip-Hop crews. The most recent crew she has been apart of since 2014 - NXG Company. She has been able to travel and learn from world-renowned choreographers in LA, Seattle, New York, the UK, Vancouver, and Toronto to name a few and has trained in numerous street styles from local and international pioneers. Quincy specializes in teaching foundational art forms, such as Dancehall and Vogue. Although, she teaches other styles as well – Even heels. Her dance, choreography, competition and performance credits include: Netflix – Dancer in “Julie And The Phantoms” directed by Kenny Ortega, Dancer/Singer in “Riverdale” Macklemore and Ryan Lewis, Apple TV series - Madeline, Nelly, Ace Hood, Kirko Bangz, Hip Hop International 2014, World Of Dance LA 2015 (1st Place) World Of Dance Edmonton 2017 (1st Place) World Of Dance Vegas 2018 (1st place) All with NXG Company directed by Alexander Chung - And is now a Co-Director of NXG Company, Dancer Palooza Los Angeles 2019, Choreographer and dancer for Ford Car Commercials (2017, 2019), “One Championship” Singapore, 1st place Champion at “50 Shades of Colour Kiki Ball (Vogue Femme)– Calgary 2019, Carnival Cruise Lines, “Funktion” Boston, and Performances at “Club Jete” and “Carnival” (Los Angeles) First Place “Artist Emerge” Dance competition solo Champion - 2017. Along with choreographing and performing, Quincy is also a very passionate instructor. Studios she has taught at include - The Kore Dance Studio, Amanda’s Academy of Dance, Shelley’s Dance Company, Ill FX (Calgary) Studio 604 and The Studio North (Vancouver) and The Underground Dance Centre (Toronto). She absolutely loves the personal connection with all her students and looks for creative and innovative ways to challenge them physically & mentally within every class she teaches. Overall, she wishes to share not only dance steps but also a variety of other amazing benefits dance has to offer such as mental, cultural, and social that her students.

KAREN GERELUS is a third-generation piano teacher, musician, author, and scholar. She has completed an Associate diploma in Piano Pedagogy from the Royal Conservatory of Music (ARCT), a Licentiate diploma in Piano Performance from Trinity College of London (LTCL), a Master of Arts in Piano Pedagogy from the University of Ottawa, and is currently a doctoral candidate at the University of Calgary where her research focuses on motivation and identity in piano students. She is a certified teacher and advanced specialist with the Royal Conservatory of Music, and active member of the Suzuki Association of the Americas. Her scholarly work has recently been featured in the American Music Teacher journal, Bulletin of the Council for Research in Music Education, and at the National Conference on Keyboard Pedagogy.

CARA LIANNE MCLEOD is a Canadian soprano praised for her "enviable clarity of tone" (Opera Canada). Recognized as a vibrant and generous artist both on and off stage, she inspires audiences with her distinct voice and compelling honesty in operas, recitals, and concerts. Ms. McLeod made her operatic debut in Cosī fan Tutte, and most recently performed Annina in La Traviata with Edmonton Opera, with whom she also sang the roles of High Priestess in AIDA, Berta in Il Barbiere di Siviglia, and then as a cover, went on to successfully perform the role of Donna Elvira in Don Giovanni. Other opera credits include Nedda in Pagliacci, Contessa in Le Nozze di Figaro and Micaëla in Carmen with Mercury Opera, Calgary Concert Opera Company, Vancouver Island Opera, and Operafestival di Roma. In recital and concert, Ms. McLeod has appeared as a featured soloist with Vancouver Island Opera, Red Deer Symphony, Edmonton Youth Orchestra, Calgary Concert Opera Company, and Mercury Opera. As the soprano soloist for the Alberta Symphony Orchestra (ASO), Ms. McLeod toured throughout Alberta, under the direction of conductor and pianist Emilio De Mercato. She subsequently has performed numerous times with him, including an outdoor concert series in 2021 that they co-created, touring throughout the province called Music in the Air. She made her Edmonton Symphony Orchestra debut with conductor Lee Holdridge, performing in Rocky Mountain High - An Evening of John Denver. She has been honoured to perform the National Anthem at the Alberta Legislature several times, including for Canada’s 150th birthday. In the past 2 years, online projects have included teaching, adjudicating for the Ontario Music Festival Association provincials, creating and hosting a series of videos about Opera and Film for Edmonton Opera with pianist leanne Regehr, and performing as a featured soloist in Edmonton Opera’s Opera al Fresco series, and the televised Valentine’s Gala. Cara has been teaching voice to students of all ages for over 15 years. She cares deeply for her students and focuses on their individual needs, encouraging them to reach their full potential, whether in private lessons or workshop settings. Ms. McLeod has also vocal coached and artistic directed numerous projects, including the small vocal ensemble at Keyano College and the Alberta Heritage Music Project, bringing seniors and students together in a music-memory collaboration and performance. She has adjudicated at several music festivals throughout Alberta, and judged the Student Recognition Awards with Alberta Music Education Foundation, a charitable organization for which she was a Board member and Chair for several years. Upcoming projects include a one-night outdoor concert event in June with Emilio De Mercato, appearing as Elisabetta in Roberto Deveraux with Calgary Concert Opera Company and Opera by Request in Toronto, and an album release.

Amanda Desousa started dancing at the age of 3 and has never stopped. She spent her dance career training under the direction of Shelley Tookey and Teresa Gibeau at Shelley's Dance Company competing and performing across Canada and the United States. She has completed her Al Gilbert Tap Exams, has earned her Junior ADAPT Syllabus Teaching Certificate and is currently working on completing her International Dance Teaching Standards certification. Amanda has been fortunate enough to adjudicate for many dance competitions and festivals as well as guest instruct dance intensives across western Canada.

Amanda's dancers have had tremendous success in Edmonton, across Canada, and in the United States. Her dancers have performed and competed in Las Vegas, Disneyland, Disney World, New York City and most recently they made a repeat trip to Disneyland during the summer of 2018 to participate in the 15th Anniversary of Dance the Magic.  Amanda’s team is excited for their next adventure to Los Angeles in 2021.  Many of Amanda's students have moved on to professional careers and can be seen on and off Broadway in New York City and in many plays and shows in Toronto and Vancouver. Amanda has also created an Elite Team Program at her studio which encourages her dancers to perform in and around the city for charity events as well as partake in numerous workshops and dance educational classes across North America. Her dancers are known for being strong competitive dancers and have had huge successes at both local and out of town competitions. Amanda has been recognized for over 100 choreography awards and has been awarded multiple "Choreographer of the Day" and "Choreographer of the Competition" awards. She has also been nominated for the YWCA Woman of Distinction Award.


In addition to competitive programming, Amanda has created and directs an “All Star” dance program which is designed for any dancer with a disability. So far, this program has been able to welcome over 25 special needs dancers into her studio and has given these amazing kids the opportunity to dance and compete. She is excited to continue developing this program and is working hard with her staff to offer the best opportunities possible for all dancers with disabilities.

Amanda is an extremely dedicated studio owner and currently teaches Competitive Tap, Jazz, Lyrical, Ballet, Variety and Musical Theatre at her studio as well as the Adult Dance Program. Amanda is very excited to adjudicate in Coronation and is looking forward to seeing these amazing dancers back on stage where they belong.

Amanda is supported by her husband Chris and her two dancers Abigail and Cadence. 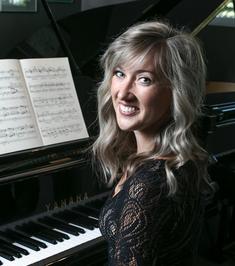